Ireland came to mind as we celebrated on the 17th of March,  the Feast of St Patrick, the patron saint of Ireland.  He wasn’t Irish but he brought conversion to Ireland. It was a one man job. We need his zeal, his patience and courage.  St Patrick, pray for us!

Still on Ireland, I went back to my notes of last year, October 2017 when Joseph (Maria’s representative) visited Sydney, and noticed how hurriedly there were taken – mostly in shorthand, grasping every word I can as Joseph was giving a mind blowing analysis of the image of Knock, the apparition that took place in 1879 and witnessed by local villagers at that time.  It lasted for approximately three hours or so with no words spoken.  There stood the Blessed Virgin, St Joseph, St John the Evangelist and an altar with a lamb and a cross on it. Flying around the altar were several angels. 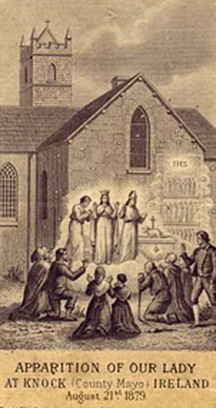 If you search through internet many sites will tell you its story and interpretation of the apparition.  But the image on the apparition of Knock, Joseph believes, is a prophetic image of the end time and here’s why:

a)   It is at this Church where Maria got her first call to the Mission.

b)  On the left hand side is St Joseph, the patriarch of the Church, is seen bowing in prayer –  praying for the Church as it goes through its crucifixion, and as patron saint of the Family, is interceding for us at this time when the definition of family is much under attack with same sex marriage on the rise and the threat of abortion.

c) St John the Evangelist with a book and appears to be preaching.   In the end time, the Gospels (the Truth) will be proclaimed to the ends of the earth with the Remnant Army taking charge. Could that book perhaps also be the Book of Revelation?

e)  The Lamb – It is Jesus, the Lamb that overcame the world. It is the Lamb mentioned in Revelation Chapter 5 that is worthy to open the Seals.  It is also the Lamb (the Blessed Sacrament on the Altar) that would be the ultimate attack of the enemy in the end time.

My 2 cents:  There is a lot to take in in this image but it brings hope. God gave us the Book of Truth as He promised and it is no coincidence that the last messenger, the end time prophet of God is from that side of the planet!   If this analysis is correct, then we surely are in the right place and in the right time, and we should all the more devote our time, our energy, our last breathe in fighting for the Mission – the mission to save souls.  I believe they all tie up together.